“I’m afraid I’m going to have to ask you to relinquish your chair, dear boy,” said the gentleman in the fedora sitting opposite in a rich English accent which could have been cultivated in the halls of Eton.

“You see, there is absolutely no way on earth I could entertain the idea of eating an entire meal with my back to the door.”

“Gunfighter?” I asked with a smile.

“No, dear boy. Just something I learned in Morocco,” he replied without a hint of mirth.

As we duly swapped seats, I was thinking this was hardly a conventional introduction to the village’s ex-pat community  – albeit an intriguing one.

But then what had I been expecting? If I’m honest, I’m not sure…

We’d seen groups of Brits gathered in bars and restaurants of course, and we’d even been told by Turkish friends that if we wanted to make their acquaintance, then they always seemed to meet in the same places and at the same time every week.

From a distance, others we’d seen in bars and restaurants up and down the harbour in Fethiye during the summer looked to be close-knit groups; mostly retired, mostly deeply tanned by years in the Mediterranean sun and, I’m afraid to say, emanating that slightly superior attitude that as a race the British tend to use, particularly towards people in the service industry.

So when it became evident that most of Kayaköy’s ex-pat community would be attending the same (and only) restaurant in the village laying on a traditional turkey dinner on Christmas Day, I’ll admit to being a little apprehensive.

But despite the slightly unorthodox introduction, I needn’t have worried. Aside from his slightly Coward-esque demeanour, I found my closest fellow dinner guest entertaining, charming and a fascinating raconteur. Another retired couple sharing the same corner of the tiny “lokanta” also proved to be kind, patient with our lack of experience “in-country” and generous to a fault.

Indeed, in such an intimate setting, it was easy to forget the temperature was mid-20C outside, that tinsel and Christmas trees had been scant to say the least and that not a single TV ad so far had tried to persuade me to buy a three-piece suite.

We pulled crackers, read out dreadful jokes, ate far too much and, after a thoroughly enjoyable few hours, waddled out the door after bidding our hosts (both Muslim and Christian) a merry Christmas.

As we left, I glanced across to the tea house next door – a bastion redolent of Turkish tradition, card games, backgammon and cigarettes – which hardly seemed to register our paper party hats and slightly raucous farewells.

Sensing that indifference, it would’ve been easy to suddenly feel a long way from home; for family and friends in the UK to seem a long way away – and I can’t deny we have missed them.

But, instead, that sudden realisation of juxtaposition, the sudden contrast, underlined many of the things which inspired us to try life in a different country in the first place.

Christmas is about family and friends, about reconnecting. But it’s also about giving thanks for what we have – and, at that moment, I was grateful all over again for that sense of adventure which brought us here six months ago. 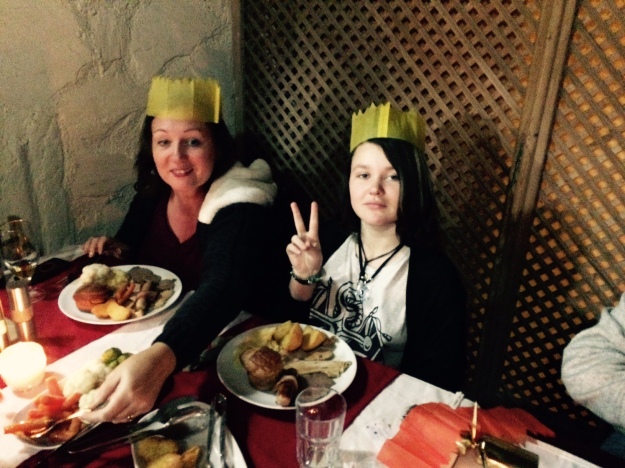 The rest of the Parsleys tucking into a traditional turkey dinner. Merry Christmas!

It was late – just after midnight – and the rest of the family had gone to bed.

I wasn’t that tired myself and I’d reasoned it was probably better to stay up reading with the dying embers in the wood burner rather than climb between the covers and spend an hour contemplating the darkness.

I had actually become pretty engrossed in the story anyway. The hero was in peril, locked in battle with his nemesis on the high seas – so it was quite an appropriate moment for my armchair to start lurching backwards and forwards.

Thinking it was one of the family come to tell me I really ought to be sleeping, I made an impatient gesture without looking round. The rocking continued for a few more seconds and then ceased.

Finishing my paragraph, I looked round ready to ask why a simple few words were not enough to attract my attention to the time of night – but there was nobody there. Come to think of it, I hadn’t heard the sounds of anyone coming down the stairs either.

Puzzled, I even looked beneath the furniture to see if one of the cats had somehow managed to get beneath the chair – but then it dawned on me. I’d probably just experienced my first earth tremor.

We’d been told they are actually quite common in the part of Turkey where we live. After all, our home is in the coastal region of the Taurus Mountains and a fault line passes quite close to Fethiye, although some distance out to sea.

Nevertheless, feeling the earth move beneath you for the first time – and in the dead of night – is a little unsettling. Inevitably, the next few minutes were fraught with expectation of another quake – but there was nothing. In fact, as the dog didn’t even stir from her slumber, I even began to doubt what had happened. However, a quick glimpse at Facebook soon changed that. 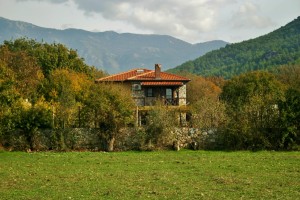 Our house is in the shadow of the Taurus Mountains which divide inland Turkey from the Anatolian coastline.

The ex-pat forums were full of OMGs and earthquake hashtags. It seemed the tremor, measuring 5.3 on the Richter Scale, had been felt pretty widely across the region. Cutlery had jangled in drawers, light fittings had swayed but, happily, there were no reports of damage.

While I was scrolling through the rapidly expanding stream of comments, our daughter suddenly appeared on the stairs.

“Did you just feel something, Dad? I’m sure my bed just shook….”

“Yep. That was your first earth tremor,” I said with as much nonchalance as I could muster.

I was still mulling it over when I fell asleep.

Since then, there have been a few more less-violent tremors. Indeed, friends have told us you get used to them after a while and only to worry if you spot locals hugging trees.

Nevertheless, I now keep my clothes, my shoes and a torch close to the bed at night.